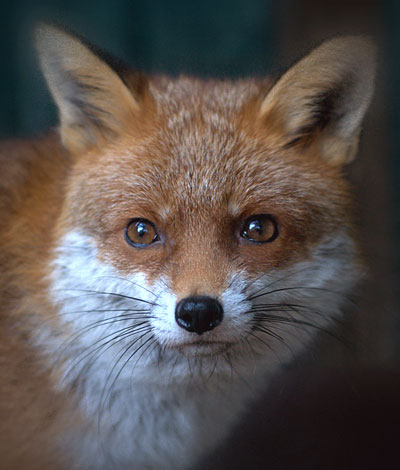 The fox is an opportunist which has adapted perfectly to urban and suburban environments. It is a small member of the canine family, an omnivore that will eat practically anything. Its diet includes worms, beetles, berries, carrion, small rodents, rabbits and birds. Although an efficient predator, it is basically lazy and will not bother with elusive prey where scavenging might produce an easier meal. Larger items it takes and buries to insure against future hard times when food may be sparse.

Fox screams often wake and scare people, but they are no more than fox conversations. This is usually only problematic for short periods during autumn, when juveniles are dispersing, and in the mating season, between Christmas and early February.

Concern is sometimes expressed over “too many” foxes being present in an area. The population, like that of all carnivores, is self regulating and limited by the amount of food and territory available. Cubs born simply replace the number of adults lost since the previous breeding season. Foxes are loners, not pack animals, and the family usually disperses by late autumn.

Having said that, the most recent scientific research on foxes indicates the national fox population has fallen by 41% since 1995, so ‘over-population’ is less probable than ever.

Foxes will take livestock such as chickens, rabbits and guinea pigs if they are not properly secured, but are unlikely to threaten cats, dogs or humans, all of which are more than a match for an adult fox. The fact that urban foxes, in particular, often appear unafraid of humans has more to do with the fact they have learned how slowly humans can move, and how fast they can move if they have to! As foxes search for food, garden damage may occur, but most damage can easily be prevented by using non-toxic chemical repellents which move foxes on humanely. Foxes are protected under a series of wildlife protection laws against poisoning, gassing, asphyxiating, maiming, stabbing, impaling, drowning, clubbing and most forms of snaring, with anyone carrying out such acts subject to 6 months imprisonment and/or £5,000 fine per animal.

The fox is sometimes incorrectly referred to as vermin.  It is not, and never has been categorised as such by the Department for Environment, Food and Rural Affairs (DEFRA), the only body empowered to impose the term on a wild species.